‘Every river has a name. However, these names disappear when they flow into the great ocean. Aikido has many styles, many names, but Aikido is Aikido. It is my vision and hope that, like the rivers , they flow together and unite as one.’

Koretoshi Maruyama was born in Nihonbashi, Tokyo, on October 5, 1936. He graduated from the Economics Department of Keio University in March of 1956, after which he joined his father’s business, Maruyama Manufacturing. He became interested in the martial arts from his Middle School years, and at his father’s urging he took up Judo and earned a black belt. Again at his father’s urging, in his first year of college, he entered the Rikidozan School of Professional Wrestling, and also trained in weight lifting and boxing, while continuing his training in Judo at the Kodokan. 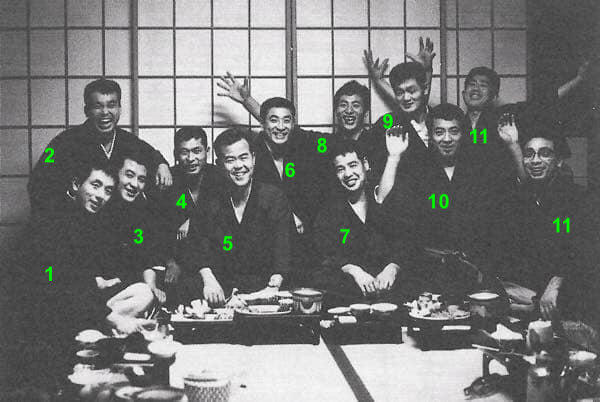 In the spring of his third year of college, he began to develop doubts about the martial arts of judo, wrestling and boxing, which emphasized a mere contest of strength. At this point he entered the Aikikai, as well as the Keio University Aikido Club. It was here that he found in Aikido what he had been searching for all those years, a martial art which did not depend on strength, and taught the right attitude of mind. After he graduated from Keio University, he continued his training in Aikido, while working in the family business.

In 1967 he delegated his responsibilities in the family business so that he could become a full time professional Aikido instructor, under the tutelage of the founder of Aikido, Morihei Ueshiba, and dedicate himself to the martial art that taught the principles of mind and Ki. In total he was a student of O-sensei for 13 years.

In 1971 he went to Hawaii for 4 months, to teach Aikido on each of the islands. In 1972, he resigned from the Aikikai to become the Chief Instructor of the Ki no Kenkyukai, founded in September of 1971 by Koichi Tohei Sensei, who granted Maruyama Sensei the rank of 8th-dan.

In 1973 he became responsible for teaching in Hawaii, and for 10 years taught Ki Principles at the University of Hawaii in Hilo, as well as at Keio University Physical Education Research Department in Japan. From 1977 he studied with Haruchika Noguchi Sensei how to heal and help people with Ki and use Ki in daily life. At the same time, he also studied the psychology of Zen from the Zen Priest Shogen Munou, from whom he learned how to use the mind positively.

During this time, he also travelled extensively to Hawaii, many states in America, Australia, New Zealand, Singapore, the Philippines, Guam, United Kingdom, Italy and other parts of Europe, teaching Aikido and Ki Principles, and eventually becoming the President of Ki no Kenkyukai in 1990. However he began to have reservations about the direction and policies of the Ki Society, and resigned from this position on July 29, 1991. From this time he undertook a period of 10 years in a temple in Saitama Prefecture, intensively training in the philosophy and practice that ‘You are fundamentally Mind.’ He left the temple on October 9, 2001, during which time he had received permission from the temple priest to establish Aikido Yuishinkai on May 9, 1996, which he has continued to develop until the present day.

As a result of this 10-year period of training, he developed the Motto for Members of Aikido Yuishinkai, something that is read aloud by members on awakening, after training, and before going to sleep.

Words have a power of their own. The power of the spoken word was recognised in ancient Japan as ‘kotodama’, or word spirit. To speak a word is to encourage it to come true. Your life energy responds to sounds and thoughts, as expressed in the spoken word. When you fill your daily life with positive words and thoughts, your life is filled with the power of Ki. In this way you can keep mentally and physically healthy, and have a positive influence on others as well. Words have real power, and can produce practical results in your life.I have written the following membership motto for members of Aikido Yuishinkai. I encourage you to read them aloud each morning and night to keep your subconscious in a positive state of mind.

I am mind itself.

If I hold positive thoughts in my mind, good things are likely to happen.

Holding negative thoughts in my mind works against my best interests.

Therefore, even if my body suffers physically, my mind remains optimistic.

Even if I encounter obstacles, my mind is never defeated.

Daily I fill my heart with thoughts of joy, gratitude and hope.

I face each new day with a bright and optimistic spirit,

which I express in word and deed.

I have faith in life, and life responds in kind.