Koretoshi Maruyama sensei:
“Please do not hesitate to invite either of them to teach in your country. Both of them have received instruction from me for many years and I guarantee that they have the ability to transmit the techniques and spirit of true aikido. That is to say that learning from them is equivalent to learning from me. You may contact either of them directly, and there is no need to ask me for permission.

I will also be available to teach internationally if circumstances allow it.”

Peter is the man I trust most in the world. His aikido techniques are of an equivalent level to mine, and even more than that, you could even say that he is me – Koretoshi Maruyama. That is not to say that he imitates me, but rather, he understands me at the deepest spiritual level. When I first met Peter at a seminar in 2002, we instantly understood each other, and now we have reached the point where we don’t even need words. I think this is the connection inherent in true aikido. I am forever grateful for the blessing from heaven that brought us together. 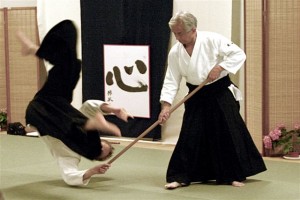 I first met Martijn in 2004, on the Dutch leg of the World Tour that I conducted that year. I stayed at his house. As we lived under the same roof, I came to understand his personality. He was extremely humble and teachable, and he had a good understanding of what I had to say. Not only when it comes to aikido, but when learning anything, it is said that a student makes the most progress if they listen humbly to what the instructor says and truly takes it in. A person, who is both humble and genuine, has the makings of a true teacher. Martijn has turned out to be a fantastic teacher! I believe he will continue to develop as a teacher, and I expect great things from him in the future.